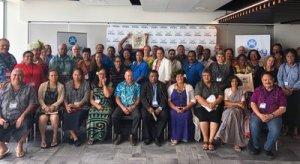 ‘Words to Action: The Pacific Media Reset’ is the theme of the New Zealand Ministry of Foreign Affairs & Trade-funded event. Tying in with the New Zealand Government’s Pacific Reset Initiative, the inaugural Talanoa session focused on New Zealand’s approach to a reset on media engagement and insights from the public radio platform as PMN goes through its own reset.

In his opening keynote address, Cook Islands Deputy Prime Minister Hon Mark Brown said no other country in the world had such long and abiding relationships with the Pacific Islands as New Zealand “with the possible exception of Australia.” With the largest agglomeration of Pacific peoples in one place Auckland is the world’s largest Polynesian city.

Minister Brown said that the successful relationship between New Zealand and the Cook Islands could well be a template for New Zealand’s Pacific Reset with other Pacific Island nations.

He quoted from NZ Deputy Prime Minister and Foreign Affairs Minister Rt Hon Winston Peters’ United Nations speech where he said the Pacific was important for NZ because of NZ’s own Pacific identity and Polynesian character. Also, Pacific, being a serious part of world space, has growing challenges like cross-border crime and implications on aviation, maritime and aviation security. The Pacific region now a “contested strategic space”, islands had more options for development partnerships. NZ also wanted to see a prosperous and self-reliant Pacific.

Touching upon the one of the biggest issues facing the region — climate change – Mr Brown said the media had an important role to play. Everything in the Pacific had a climate change component. “I see development finance and climate change finance were two sides of the same coin,” he added.

A talanoa session on Pacific Media beyond 2020 followed with NZ MFAT Director of Pacific Connections Georgina Roberts, Peter Fa’afiu of PMN and Natasha Meleisea of Pacific Cooperation Broadcasting Limited (PCBL), after individual presentations by the three panellists. The audience asked several good questions relating to the development of media in the coming years.

The summit concludes on Wednesday 13 February. Pacific Periscope will file another report on the summit in the next edition.